I just noticed (thanks to the counter on my personal homepage) that it has been 365 days, one year, since my last contract as a paid scientist run out (a 2-year mobility grant by the Austrian Science Fund FWF). Time for a resumé.

How does it feel? I simply love it!!!

Science is fun. Well, when you are not brain-dead like certain political "conservative" movements in Europe (AfD, AKP, Fidesz, PiS) or the U.S. (Republicans, not all, but many and all those sitting in the White House) and consider it evil. Science is often linked to fact (there is, notably, a difference between 'results' – the facts – and 'conclusion' – their interpretation), and everyone can understand why they don't like that. Did you know that the U.S. unemployment rate dropped down to a tenth in the same time span? If not, check out what Team Trump said before the election.

Being a professional scientist is no fun

Science-business, on the other hand, can be a nasty one. The most annoying bit for me was to get our research published. You analyse your data, you get your results, you do some colourful graphs to present them (which occasionally have been appreciated as scientific art), and then you have to draft a text. That could be fun, but you spend most of the time thinking about what part the reviewers will pick on, will be difficult to follow, etc. The part I hated most to draft was the introduction ... usually an utter waste of time (and space).
Still. You do it as best as you can, and you dump the paper, and leave its faith to the wizards (and monsters) in the Forest of Reviews (#FightTheFog, join the fight here, just noticed #16 has signed up!), so it may be deemed worthy and cleansed from error (real and unreal), and heretic views.

The latter, admittedly, is a personal and not so common problem of a paid researcher: I do not like following the (main)stream, when it leads to a cliff. Do what has been done hundreds of times before (with little benefit), and confidential single-blind peer review will be like dipping into butter with salt crystals that you carried hours through Paris (to have a unique French treat in Stockholm), just to have the security take it away from you at the airport (being already orange on their scanners...) Do it differently, and a bumby ride is assured, including optional smashing into concrete walls.

But it could have been worse. I was lucky to have never occupied an institutional position, my salary was paid by personal grants funded by the German (DFG), Swedish (VR) or Austrian (FWF) national research agencies. So, I had little admin, no lecturing obligations, and other services that keeps you away from research. There are still, though a substantially decreasing number, of professors that use Ph.D. students and post-docs to not only write their papers but also e.g. to maw their lawn at the weekend. The backside of my medal was that I had to write applications every now and then to keep the Rubel am Rollen (old German saying: the roubels rolling). And applications need, above or in addition to other things – luck, contacts, beneficial combination of nationality and sex – publications in "good" journals. "Good" in this context means high journal impact factor, which has little to do with the quality of studies published in the journal.

If you're getting fed-up with writing (publishing), you have to stop with professional science (unless you have a permanent position, and even then, it may be problematic because of internal evaluation etc.) And I did, and did not apply again. For Austria my science record (and "impact") would have probably be good enough for another few years.

Explanatory note: The H-index is a odd-statistic score widely used to rank scientists; the i10-index is the number of papers cited more than 10-times (sounds little, but even in the highest impact journals Science and Nature, most papers never reach it). My 2016/2017 citation surge is a bit inflated by an increased number of self-citations. We published 20 papers in 2016/2017 – the time in Vienna (2015/2016) was very productive (it usually takes about a year between finishing the research and getting the paper published). Main reason is that we soon realised that my applied project was useless to pursue (for scientific and science-political reasons), so I was free to roam the scientific landscape. Also, I discovered (too late) PeerJ as dissimination platform, which has been a game-changer regarding the joy to publish despite peer review. If only other journals would follow their example, but without pressure from the scientific community, there is no hope.

And now it has been one year that I'm out-of-business (professionally).


... have been, oddly enough, probably the most productive 365 days of my life as a scientist. Although I'm not working anymore (as far as socially feasible). As a good German, I only work when getting paid for it, and no-one has the money/means to pay me. But I still poke my (now former) colleagues to get our unpublished stuff out and still help them with tips and tricks, and a graphical pimp-up here and there (I love doing nice graphics). But I leave all the dirty work, like getting it published, to them (they are paid for it, right?) And, having an excessive amount of free time, I started blogging; thanks to David Morrison, who hosts the Genealogical World of Networks and encouraged me to try it out: Disseminating science is fun again.

Being not hindered, or just annoyed, by the peer review process, blogging allows me to freely dissiminate my ideas. As a paid scientist, it's tricky. Everything that is not formally published (in a peer-reviewed journal) is free to steal, and you don't want – no, you can't afford – your ideas being stolen. You need them, and the formal publications, for the next grant.

In my EndNote reference database, my (non-comprehensive) "publication" list for 2017 looks like this (20 entries, best year ever): 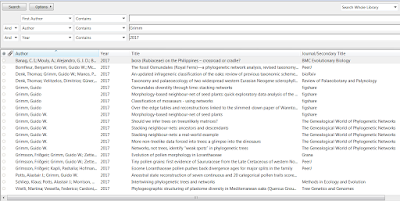 And – because it is fun – there'll be more to come in 2018. You don't want to miss it, maybe there'll be the one or other good idea to steal.

So come and follow me (us) on
So let's hope, I'll find enough torches in 2018 to light my way to the next bridges to burn!

PS If you want to keep me doing what I do, you might want to actively advertise this blog to friends and colleagues, so I can get enough traffic to make some money out of it. So far, I'm far away from the 10,000 views (I totalled 2500 since start), you need to sell yourself to Google's AdServ. Otherwise, I may be forced to get a real job again (such as replacement teacher or worse, so far my French is too bad to work), and you can be sure that I won't bother with science (or else), when I have to work eight hours a day (or even four).

By Das Grimm at January 18, 2018
Email ThisBlogThis!Share to TwitterShare to FacebookShare to Pinterest