How to get from Orléans to Paris on a railroad strike day?

Macron is sparring the French rail unions. The latter have engaged in what they call a "perl-strike", two days close-down, three days recovery, till June. With quite interesting side effects in the era of Big Data.

France, who has much less union-organised workers than one may think, is famous for its strikes. In fact, its world-leading on this front (as pointed out in last week's Canard enchaîné). Now Jupiter Macron, our elected monarch, is feuding the workers of the SNCF, France's railway, to rid them of their benefits. (Puny) Gods and (tiny) giants engage in battle, and as consequence, the French commuters and public can enjoy their favorite hobby: practising patience.

According to public announcement, only c. 25% of the employees of the SNCF partook in the first two strike days yesterday and the day before (a number contested by the union, of course). If correct, it indicates the SNCF has obviously a lot of admin people with little function (and something Jupiter is surely not going to change), because only about 1 out of 4 TGVs, the main fast trains, was not suppressed and 1 out of 6/7 local and normal trains. Those numbers were also euphemistic as we found out first hand. For instance, the SNCF announced that the transport to Germany is unhindered, but the TGVs going from Paris to Stuttgart etc. stopped in Strasbourg, which isn't yet Germany. But all the German ICEs were going, naturally. So, yes, you could reach Germany, but not with the SNCF.

These days, Big Data makes it possible that – as a traveller – you can inform yourself what is going to happen when you are going to embark on a journey on a day you shouldn't because of the strike of a minority of railroad employees that bring nearly everything to halt. Here's what you got as options (to get to your German ICE that would bring you out of the country) for yesterday, April 4th, when you searched the SNCF site for a connection between Gare Les Aubrais (Orléans) and Paris-Austerlitz, Paris' southern train station (1h by train, usually 1–5 trains per 2 hours) after the morning commuting trains (3 going between 6 and 8, you don't want to piss of all other French, when on strike). 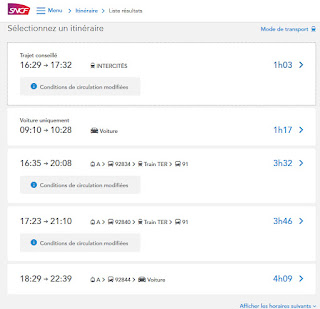 There was one more normal train connection (in the late afternoon, top).  But the only timely option suggested was to take a car (voiture) and drive yourself. You start at 9:10 (don't ask me why it suggested 9:10 as starting point), and 1h17 later you are in Paris – it took us 2h30, naturally. Paris is always an adventure with a car, and during striking trains phases (whatever reason, technically or human-related) it becomes a pretty nightmare.

That a train company suggests using a car as alternative is funny enough (by the way, it's a standard option you can select), but the alternatives are equally odd.

The A is our local tram, here taking you to the main bus station to get on a overland bus that brings you to one of the few local trains (TER) still going, which then allows approaching Paris to catch a Parisian bus (the line 91) bringing you to the Gare d'Austerlitz. Even though these suggested alternatives are insane (over 3h country trip): be provided such itineraries is actually impressive, the local tram, the overland bus and TER trains, and the Parisian bus are operated by different societies. You can find even most convolute connections, updated to the current strike situation, thanks to Big Data, and effectively in real-time (one the day before, they promised a couple of more direct connections during the day, but they were vanished late night, maybe because the 26th percentile went on strike, too, on shorter notice)

So lets say, I just need to get to Paris, no matter at what time, and choose the last provided alternative for the day: 18:29 – four relaxing hours on the Orléans tram, then an overland bus, and then ... a car?! This made me curious. 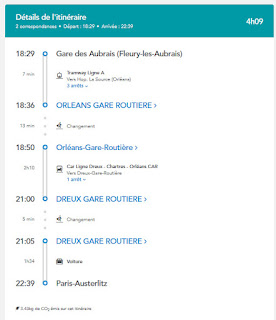 I had no idea where Dreux [wp-EN; hp-FR] is. Turned out, it's a town west of Paris (Orléans is south-southwest), an hour farther away than Chartres, the next big town to the north-west from Orléans.

Chartres is famous for boosting the largest cathedral in all of France, outmatching ours in Orléans (the famous Notre-Dame in Paris is only the third largest). And still have less an idea why there's a bus connecting Orléans with the surely beautiful and worth a visit Dreux.


But what is the Big Data algorithm thinking to send me to a town not much closer to Paris than my starting point, where I then have to hire a car for an even longer drive to Paris? Are more cars to hire in Dreux than in Orléans? Are the people of Dreux more likely to help out a stranded traveller?

We probably will never know, but one thing is sure. Big Data and all those fancy cross-referencing algorithms give you more options, but there's no thing like a swarm intelligence in the machines. If you have to depend blindly on them, you are as lost as before without any quick-access info. Or even more, finding yourself in a town you've never been, by following blindly the machine. Like the old Belgian lady who found herself in Zagreb, Croatia, after a 24h drive rather than Brussels 90 km afar from her home, listening to her car's navigating device.
By Das Grimm at April 05, 2018
Email ThisBlogThis!Share to TwitterShare to FacebookShare to Pinterest