For this Eastern, I'll advertise something colourful to turn our eyes back from ourselves to the planet we inhabit: a live simulation/representation of Earth's dynamic surface and atmosphere.
As palaeo-/neobotanists, we often pondered about the distribution of modern plants, and how history (we are talking about millions of years) shaped those.

The discipline putting up explicit scenarios is called "biogeography". The papers usually show a so-called "areagram", a graph depicting a phylogenetic tree where all nodes are labelled to indicate the modern (in the case of the tree's tips) and reconstructed "ancestral" area. An ancestral area is the part of the Earth reconstructed to be the place of origin for a lineage.

However, when you read one of our biogeographic papers, including the ones published in the Journal of Biogeography, you often won't find an areagram. For a simple reason, either our data were (and still is)
Such as finding genetic signatures that are much too similar regarding the modern (and past) geographic distance between the analysed plants.

Plants don't walk but they can still migrate. And their pollen and some of their seeds are dispersed by wind and water. Hence, when doing biogeography, it cannot hurt to get familiar with Earth's dynamic atmosphere and hydrosphere. And this is how I found one of the most beautiful online services (not only for scientists)


earth:: a global map of wind and water https://earth.nullschool.net/

When you open the link, you'll see something like this (the real stuff is animated not static, but I have no idea how to capture an animated gif).

This is Earth just now (well, when I wrote the post). The colouration gives the wind speed (blue: no/little wind; green: wind speeds of ~ 50 km/h. Let's turn the world a bit and zoom in on something interesting currently happening: level 5 cyclone Harold (Wikipedia).


You can click on any place (the little lush green circle), and a little info window pops up telling you where you are, and the actual situation you are looking at, at that very spot.

But there is much more. Let's click on "earth" on the lower left corner and pop up the menu. Enough text, let's have some more screenshots (since some of us can't go out this Easter to look for real bunny eggs).

Watch the seas
You may have heard of the Gulfstream, the ocean current that makes sure Europe isn't covered by glaciers (again) and comparably mild in respect to the same latitudes in North America and East Asia)? Let's roll the globe, select Mode: Ocean, Animate: Currents, Overlay: SST (sea-surface temperature).

As I was told by a colleague these days, spring started not only pretty late and chilly in Europe but also in Alaska, where you still can enjoy heavy snows (unusual for this time of year). One reason is probably that this year a warm ocean current, the Kuroshio Current – passing the south coast of Japan and transporting tropical heat deep into the North Pacific – is not as strong as last year. (PS the weakening of the so-called Global Ocean Conveyor Belt that transports cold and warm waters all over the globe, was a projected consequence of human-made climate warming; its motor is fueled by heat differences between low- and high-latitude seas and within the water body but both the equatorial and polar waters heat up.)

While sitting in a boring video meeting
Not a few of us are now in home office for reasons of social distancing to slow down the spread of this year's plague—flatten the curve. But that doesn't mean, we get around the usual boring and pointless meetings with unwitting superiors or other people that just don't care about what we do but also have to fill their time sheets. The camera is on top of the laptop, you need to look interested and intrigued: ideal time to test some more options of earth:: a global map of wind and water.

Since there's no point in flying anywhere anymore (closed borders), let's enjoy exploring the famous west-east striking jet streams—the reason we fly the shortest way (over the pole) from Europe to North America but a longer way (along lower latitudes) back.

A little change of height and projection, and it becomes modern art; animated one, only screenshots here, but when you check out the original, everything wiggles and moves.


A propos wind- and water-dispersed

A striking example of genetic invariance are Australian Nothofagaceae and their sister species from New Zealand. In 2012, Sauquet et al. published a dating analysis of Fagales with focus on this family to show the difference between several dating schemes. One was using ocean formation as age constraints. The ocean between Australia and New Zealand is middle-aged (on geological time scales) and Sauquet et al.'s set-up used a 55.8 Ma constraint for the divergence of the sister species on both sides (the same was used for the split of New Guinean and New Caledonian members of Trisyngyne (= Nothofagus subg. Brassospora; Heenan & Smissen 2013). Geotectonically it seemed possible (when you think plants behave like animals when it comes to reproduction), biologically and genetically the test was complete nonsense: in the data Sauquet et al. used, the antagonists from both sides of the oceans were near-identical (which was one reason their "safe" ingroup dating constraints gave much too old estimates for the outgroup, and "safe" outgroup constraints much too young estimates for the ingroup, but that's a different story).


If their speciation, the Australian-NZ split (or New Guinea-New Caledonian split), was triggered by the formation of the ocean, the data showed they didn't evolve at all in over 50 million years.

Now, at least four of the five Nothofagaceae of New Zealand are wind- and/or water-dispersed and all are wind-pollinated. Let's check out the winds and water currents. Nothofagaceae species may have been separated by an ocean for 50+ million years but that doesn't mean they are not connected via wind or water (or have been until the recent past). The "Native Beech", as Nothofagaceae (lit.: the "false beech") are known in New Zealand, pollinates between September and December (PDF from allergy.org.nz, the NZ annual pollen calendar), it's probably not much different for their Australian sisters.


And here's how it looked a month ago, near surface (1000 hPa, seeds are larger as pollen), i.e. towards the end of the fruiting season (November/February through April; see e.g. NZ Plant Conservation Network)


And, just because it's nice, the waves and water currents at the same time (PS biological rafts are a real thing: plants can cross water floating with/on sea-debris). 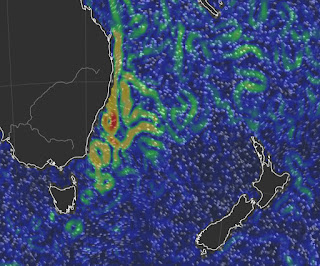 There may be an middle-aged ocean of substantial width between Australia and New Zealand – these days 1700–2200 km stretch between false beech forests – but ample transportation means to cross it during any season (if you not have to rely on walking on dry land like most mammals).

That's by far not all...
...but enough for an Easter egg post. One last tip, next time the world is burning, Wuhan is not under lockdown anymore and the world's workbench is on full throttle again, or sand from the Sahara is raining down on you, check out earth:: a global map of wind and water with the following settings:

Happy Easter and Earth watching everyone!
By Das Grimm at April 09, 2020
Email ThisBlogThis!Share to TwitterShare to FacebookShare to Pinterest