Palynology from A to Z: People

Five of my palynology advertising tweets (have/will) introduce(d) researchers pushing forward the importance of palynology in contemporary organismal science. With four, I worked, and we published a good deal of papers including some pretty unique ones, which hopefully will provide templates for future cross-disciplinary research.

Day #2 — B as in Johannes Martin Bouchal

Johannes [Twitter-thread] started an Austrian-Swedish Ph.D. at the Naturhistoriska riksmuseet (NRM; Swedish Museum of Natural History) in 2014, a bit after my last contract there run out, co-supervised by Thomas Denk (NRM; see Day #4) and Reinhard Zetter (Day #26; Vienna University), two of the five researchers featured in my advertising of (palaeo-)palynology.

Despite his young age and chosen scientific discipline – bio-systematic palynology is fringy even within palynology, itself an understaffed and underappreciated biological fringe science – Johannes has already an impressive publication record. Just check out his GoogleScholar and Orcid profiles. After finishing his Ph.D., he did a bit of post-doc at the NRM in Stockholm (on Thomas' project) and has now moved on to the aeropalynology research group at the Medical University of Vienna. 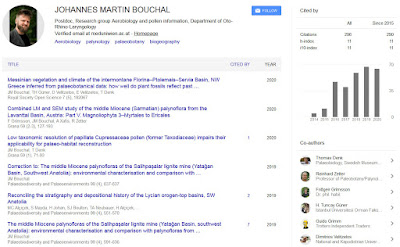 He's an extraordinarily sincere young scientist and any paper in his literature list (especially the ones with him as first-author) is worth a read, hence, I have/will advertise(d) not a few of them in my Palynology A to Z twitterade and blog series.

For his 2013 Austrian Diplom thesis, the Austrian equivalent of a M.Sc., Johannes – trained and supervised by two of the best (personal opinion) living systematic palynologists: Friðgeir Grímsson and Reinhard Zetter, masters of the so-called single-grain method (Day #19) – worked sediment samples of a well-known North American (Colorado) flora from the Eocene-Oligocene boundary, the Florissant Beds (a US national monument site). The PDF of the thesis (120 pp., 24 full page plates with LM and SEM) is freely available on the publication server of the University of Vienna.

The Florissant Fossil Beds have been studied for nearly one and a half century and a lot has been published. Nonetheless, by applying the single-grain method to this flora, Johannes managed to document the occurrence of hitherto unrecognised gymnosperm, Ginkgo and Cathaya, and angiosperm genera/families: Alangium, Diospyros, Lamiaceae, Menispermaceae and Tetracentron – one of two genera of the isolated Trochodendrales.*

In addition, he used our knowledge about oak pollen to specify which infrageneric oak lineages thrived at the eastern side of the Rockies at the Eocene-Oligocene boundary marked by global cooling. Johannes' first first-authorship paper (Bouchal et al. 2014) was published soon after in the classic American Journal of Botany and dealt with this highlight from his Diploma thesis, the occurrence, palaeo-ecology and evolutionary significance of Fagaceae (day #6 tweet) from the Eocene-Oligocene boundary of western North America.

Because the authors paid for it (using their grant money), it's open access; and features, as all palynological papers published by the Vienna group, high-resolution pollen plates.


Hopefully his new job will him allow to write a few more palaeopalynological papers. There are too few of them drafted by people that combined peculiar skills – picking the right pollen using a light microscope to put under the scanning-electron microscope is a rare one – and general interest not only in a fringe science such as systematic palynology but also its many applications and implications. Check out, for instance, this open access/ open data (and open reviewed) paper:

* The thesis also mentions Lithocarpus as a new genus – a SE Asian tropical-subtropical Fagaceae with a single morphologically near-identical but genetically very different and phylogenetically distant relative in North America, the 'false Lithocarpus' (Notholithocarpus) or tanoak, but studying Fagaceae in further detail, Johannes has come to the conclusion that is it impossible to distinguish the genera of the paraphyletic Castanoideae using pollen (hence, the pollen became 'Castanoideae sp. & gen. indet. 3' in Bouchal et al. 2014). Rectifying/ Clarifying one's own research is a too rare trait among life scientists.

By Das Grimm at July 23, 2020
Email ThisBlogThis!Share to TwitterShare to FacebookShare to Pinterest