European Not-Really-A-Union #2 – A Game of Cards

Although, it would make the world an even less social place, there are a lot of good arguments to get rid of cash. My beloved Sweden has always been on the foremost front of this. However, the technological advances have made this quite impractical, as anyone can find out when living/travelling in more than a single EU country.


Recently, I was able to spend a week in the Netherlands having been invited to a workshop about phylogenetic networks. I haven't been there for decades, but little enough seems to have changed. As a German living in France, I readily noticed the generally low prices for food, e.g. in the big Dutch supermarket chains such as Albert Heijn, Coop or Dirk. Linked to the low price, you often can't use your VISA-, MasterCard or similar, when paying. Which eliminates using a French bank card, which relies on either company for any out-of-France use. Or a Swedish Allkort. But you can pay using a German bank card without VISA or MasterCard functionality. A card pretty useless in France these days.

Nur Bares ist Wahres ("in cash lies truth") — Germans love cash, and distrust cards. Until this day, many still don't have any Kreditkarte (lit. credit card), and not a few solely use cash and not even their Bankkarte (lit. banking card) or EC Karte (named so because there used to be an EC symbol on it). Debit cards including at some point e-pay functionality. In Germany, but also abroad, because it was often coupled to the Maestro system. 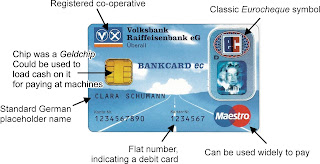 When travelling inside the European Community (then Union) or coutries with a lot of German/EU tourists like Turkey, there was no need for a Kreditkarte or carrying lots of cash, because the EC Karte could not only be used to draw money from the cash machines (soon cheaper than bringing cash from Germany or exchanging at place), you could use it as plastic money (at some point the "EC" was completely replaced a "Maestro" sign).

Nonehteless, I had to get my first Kreditkarte early, in the mid-90s. Because I travelled to Iceland with the university and it was advisable to have plastic money with you (MasterCard, VISA, etc.) Iceland, like other Scandinavian countries, had already moved from cash to plastic, with some shops/services even refusing taking cash (no cash, no robbers). Maybe it was because Iceland was no EU country, the EC Karte would not be enough. And, indeed, I could use my Kreditkarte to pay for everything, even when buying a pack of chewing gums. 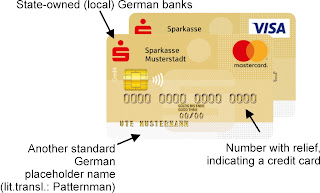 Like all VISA, MasterCard, etc. back then the German Kreditkarte was a credit card. You used it, and at the end of the month, the amount you charged on your Kreditkarte was equalled out by an (automatic) transfer from your Girokonto, your main account (no interest, but they got not a few with the high toll of an unbalanced account). It still often works like this. Well, in Germany.

I lived happily with my two cards, the EC Karte, which you then could even use in Aldi, Penny or one of the other many discounters to buy (too) cheap food, shoes, clothes, toys etc. in Germany (or abroad) and the Kreditkarte for more expensive things (and shops) or the internet. A card, which the discounters would reject, because of the back then 3% charge, Visa and MasterCard cashed in for every transaction.

[And when going to the U.S.: traveller checks, because paying with the German Kreditkarte was refused at all cheaper places as well (mainly important for gas stations, who still have two prices); and the EC-Karte with the Maestro sign worked in some places but not in others (independent of what they promised).]

But then I moved to Sweden, and became a near-plastic-only (and fully transparent) consumer.

First, I learned the difference between actual credit and debit cards, because my Swedish bank offered me several options, but all included VISA/MasterCard functionality (like many Germans, I thought the last is synonymous with having a credit card). In Sweden to use the public transport, you need a smartphone or plastic, cash is useless (avoids robbing of busses). In the shops, pubs, restaurants etc. you paid with plastic, of course. New to me was that you can even put the tip on the card. No cash needed in Sweden for anything other that entirely private transactions.

My Swedish card had the label Allkort (lit. all-card), it was a debit card (like the German EC/Maestro Bankkarte), but with all functionality of a Kreditkarte. And as such, I could use it in a lot of places, all over the world. Some machines recognised it as a credit card, others as an ordinary bank-/debit card.

Then I spend more and more time in France, and learnt how technological advance from cash to plastic erected new barriers.

EU? Not really a union, not even with the €
Socio-technologically, France is often behind Germany, which trails after Scandinavia. When plastic was commonly used in Scandinavian countries and increasingly in Germany, French still used cash. Nonetheless, they also had a carte bleue, a bank card, which could be used like the German EC-Karte in Germany, or any plastic in Sweden. Now, the magic of plastic has fully arrived in France, and the all-present "CB", successor to the original carte bleue system, has pretty much replaced cash. And the CB makes France unique again! 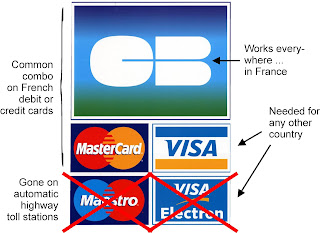 One year, I could go to the supermarkets/gas stations etc. not accepting "credit cards" (i.e. such with a Visa/Mastercard etc. symbol/functionality) but the carte bleue and pay with my German EC Karte featuring the Maestro symbol. I could also use it to pay the fee for the autoroutes (the French highways).

A year or two later, my Swedish Allkort would still work (which, oddly, never had a Maestro or alike symbol on it), but not my German EC-Karte. And had to call and wait for the service being stuck on the autoroute because I tried to get out in Pithiviers, from the new A19 (France's first "éco-route", most of the trees planted died already). New toll station, no people there anymore, no cash, only plastic. Sheer future! But the Maestro/VISAElectron (VISA's Maestro counterpart) symbols were crossed out (the bigger toll stations have always still a cash counter for German and Dutch tourists with their now useless Maestro cards).

And since two years, my Swedish card, which used to work whenever the Germans failed, is also refused in France and Germany as substitute for carte bleue/CB and Maestro (still the same card, apparently the system changed).

Now, not a few places in France, where you may still find the Maestro/VISAElectron symbols in the windows in addition to the CB, it can be tricky. For instance, you need a French carte bleue to fill your car at the automatic gas stations of the supermarkets, which charge you less than the petrol chains. Effectively the classic foreign debit cards are only accepted in places, which anyway accept credit cards and the rest is now for French ("CB") only.

So, I needed a French account and card to maintain my cash-free life. My French card is, like my Swedish, a debit card with VISA functionality. This renders it useless outside France for all shops refusing credit cards (not a problem in Scandinavia, because they rarely make the distinction). The CB function works only within France, so to pay in the Netherlands (a country using the same currency), you need cash. Or a German Bankkarte with the Maestro symbol, which will just do fine!

[In the U.S., you can only use the gas stations with the double price tags. And – at least in California – you have to pay in the shop. Because: the machines treat the European debit cards with Visa/MasterCard functionality always as credit cards, and ask you for your residence ZIP code (needs to be an American) and don't recognise them as actual debit cards to be used with a PIN number. And at the counter you of course pay the higher price for "using credit card", not the one for "debit card/cash".]


However, when you draw cash, you are only charged the fixed price like for the Swedish Allkort, the German EC-Karte (now without EC symbol, but many others), and not the 4% it used to cost when drawing cash with your VISA/MasterCard Kreditkarte.

[For my non-EU readers: international transfers within the EU are handled like domestic ones, we have IBANs all over the place, and usually there's no extra charge. And since many of us have a common currency, the Euro, there are also no exchange charges/risks. For the banks, the effort for booking money from e.g. a German account to the account of a Dutch or French supermarket is the same than for a German supermarket. In case of the national debit systems like the French "CB" a small sum/bulk price is charged for the service from the business, but credit card fees can still be up to 5% according to the EU Commission: see "Disadvantages of accepting card payments in your tourism business"]

The newest innovation in France is now a carte bleue that doubles as debit and credit card. You have to admire the French love for over-complexify simple things! When you have one of those cards, every time you put it into the card reader, you are asked if you want to pay debit (directly) or on credit (you may be able or not to choose the length of the credit, with the usual high annual interest rates).

Outside France, it can happen that you can't pay at all according to various experiences shared in the WWW (maybe just starting problems). Including places accepting VISA/MasterCards, because this fancy dual functionality confuses card readers elsewhere.

Yes, let's get rid of cash.
No black money, no robberies, no VAT evasion. And no happy children faces getting a little extra from grandpa or granny (especially desastrous for German Catholics, every kid loved opening the envelopes you get from the larger family and neighbours for your Holy Communion; even if your parents then take everything away to put in the the bank for later. Never forget my first 450 bucks.)

Just need to stay within your country of residence, don't cross accidently a border.

When you do, go to the bank, and open an account to get a second card there with some other logos. You never know which country's card is needed for another member of the European Union (or outside of it).

Maybe, at one point the (remaining) member states, banks, and payment services will find a way everyone can pay with ones standard banking card, no matter in which EU/€ country it was issued, something like this failed (naturally) intiative. Like it was possible with the long-dead Eurocheque.


By Das Grimm at September 05, 2018
Email ThisBlogThis!Share to TwitterShare to FacebookShare to Pinterest