100th anniversary of woman voting, time for the next step

Today is the 100th anniversary of woman voting rights in my home country Germany, and not a few other (still) functional European democracies. Maybe it is time to go the next step.

We see a lot of images these days about the Armistice [Wikipedia-EN/RTL-LU] celebrations, the 100th anniversary of the ceasefire ending World War I (in Central Europe) on November, 11th 1918. Just a day later, women got the right to vote in German elections. An important revolution in the wake of one of Europe's greater tragedies.


Half of the human population are women. But when we look at our governments and head of states, what do we find? Usually men.

So, one gets flooded by images of big (or biggish) males celebrating peace after a war, other males brought over us. Humans are primates after all, Herrentiere. Among the duly concerned, men with political agendas and characters well-fitting 1914, but not 1918, and for sure not the reality of our (modern west-style) societies in 2018.

Greatest of all, Trumpelchen, Mr Bigot (couldn't visit his veterans because the heli didn't fly, did the bone spurs hurt?), sitting big baby of the USA, head of the manly Republicans (see below). Demeaning women on a regular basis. Don't rely on the "phony news", just read his tweets and those of his fellow "real" men. A pity, YouTube banned Infowars (click on your own risk), the president's second-most important truth source. And exchanging them, when they get too old: classic. A party where many (men) are deeply concerned with saving unborn lives, while permanently rattling the swords to take those of grown-ups – within and outside their country. [I don't care, if you are "pro-life" or an "abortionist", it's no our (men's) business: women get pregnant (and too often by force of some kind), they carry, and to a large degree – even in our modern societies – have to cope with them afterwards: they should decide.]


While Trumpelchen only bleaks (or bleeps), his Russian counterpart acts. Putin the Great, elected (sort-of) tsar. In contrast to Trump, he also has the physis, and brains, and takes action: e.g. the Crimean peninsula — turned out to be a piece of cake; Syria – fear the Russian Bear (a recurrent motive in history); Brexit and other elections — all the trolls do you need; gas — talk to my bro' Schröder, yes, he was your social-democratic chancellor in a former life. Female friends in useful places? Just blue-Marine (Le Pen) ruling the otherwise very manly Rassemblement nationale. That's it.

There were also smaller fish like Erdogan, Sultan of Newer Turkey, who seem to have only one agenda: throw every piece of modernisation overboard that Atatürk, literally the Father of modern Turkey, forced on his people — in the wake of World War I and having learned the lessons from the fall of the Ottoman Empire. In Central Europe, we put down the weapons on November 11th, while the same men laid the fundaments for the modern-day wars in the Orient. Proper men's work.


Or relative harmless ones like Jupiter Macron and his dream of a New France. A better one, a modern one. And, in contrast to the ones before, one that staffed half of his government with women. Hurrah! Well, the less important offices: the important ministers in the government and top-jobs in La République en Marche, his voting club, are all filled by men. But can't blame them: Germany needed to bring another World War over France, so women got the right to vote there, too (April, 21st, 1944; article 17). 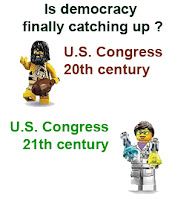 Half of the human population are women. In our (post-)modern western-style (proper) democracies, they typically make up for more than 50% of the electorate that goes to the booth. But there are no representative parliaments, not even in countries like Germany, with a (semi-)representative parliament. "Semi-" because our 5%-threshold, the "lesson-learned" from the Weimar Republic, which followed the Armistice, invalidates about millions of votes (2.3 million in the last federal election).


Looks a bit better in Jupiter's New France, doesn't it? In the parliamentary group of his victorious La République en marche (REM) nearly as many women (149, 48%) as men (159) can be found (their partners have 29% and 37%, respectively). A matching with the situation found in left/progressive German parties in the Bundestag (SPD 42%, Left Party 54%, Greens 58%). But this is a bit of an accident. His movement just couldn't recruit enough men to fill all seats in such a short time. And not few of these women competed in risky conscriptions, while Jupiter's men run in the expected-to-be-won ones. And turns out to be a problem – some newly elected women-en-marche utter their opinion rather than to follow their king's whip.

And, thanks to Trumpelchen, the new U.S. congress may have seen a surge in female representation, including a handful of female scientists. But it's far from representative. And still "sad, so sad" compared to what we old Europeans are used to (like so many things in the U.S. these days). 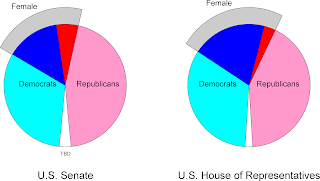 This misrepresentation is not our (men's) fault, entirely. A (faint) majority of white women still voted for the Republicans in the midterms this month, despite Trump and the Republicans' fetish for men finding e.g. arguments for women cannot get pregnant when being raped. I do understand, why men would vote for their shiny candidates (few are like Trump, but too many get closer to him). We like stupid, we like dirty (a mammoth-hunting thing, I suppose), and taxing less the rich equals taxing men less (in the German version of U.S. libertarians, the FDP/Liberals, also 3 out of 4 MPs are male).

But why would a woman vote for them? But, it's not just in the States. Sarkozy became president, because a many French women distrusted Mme Royal, being a woman. Who has ever heard of a female, successful monarch? Then voted for her earlier mate, the teddy bear Hollande to get rid of Sarky. Could she really have been a worse president? Less fun for sure, she wouldn't have been caught riding on a vespa to her little sex-toy. And although it was mostly male Italy who voted bunganissimo Berlusconi, a complete failure in all aspects. But he couldn't have won without some women supporting him. All four times.


We only have Mutti Merkel, because all the grey-backs in the CDU/CSU took shelter when der Dicke, long-sitting (literally) Helmut K., imploded in his own mess. Mayday May only rules because none of the males (Farage, Johnson, Davis etc., all in hiding know) that pushed Britain over the Brexit cliff, didn't want to take responsibility for what would come afterwards: the choice between bad and worse. Men decide, women clean up. In Hesse, it will be likely an old-man, younger-man team; and in Bavaria the bit-modernised CSU (regarding women and power) formed a coalition with its former self, the "Free Voters", another primate club.

Elected by as many women as men. Let's take Bavaria as an example, since knwon (to Bavarians) as die Vorstufe zum Paradies, pre-paradise. 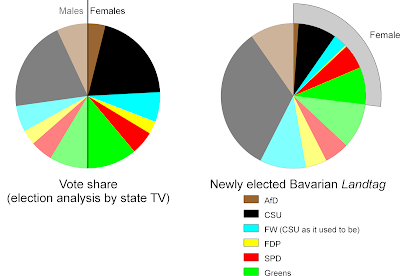 Seems only female voters of SPD and Greens got their proper presentation in pre-paradise in 2018.

But it doesn't stop with politics: in the civilised West (not including the U.S.), we have worker representation in our businesses. But even if most workers in a factory are women (year is nearly over, but German women have another 126 days to equal-pay-day, about the same in France, the U.S. need two extra weeks), who represents them? Union-men, naturally.

If you stop doing it, maybe even the conservatives will let competent women raise their ranks for a change. Also conservative women should be fairly represented in our parliaments by their kind.

Because, one thing is obvious: We men will always use our power to fuck up things. Stupid ideas and philosophies have always been and will always be supported by a sizable bunch of men, usually without any reason (or reasons). Women can do better than that. I not often agree with opinion pieces in the SPIEGEL (anymore), but this one is right: democracies need women, or they'd be doomed.

Half of the human population are women. And we have no biological reason to assume, it ever was much different. Nonetheless, since 2–3 (or 5–7) millennia, it has been men deciding what to do. Millennia filled with senseless wars (even those that made sense, did overdo it) and wasting time, wealth, and resources.

While men (at least in Europe) were hunting the mammoths and having some fun with the guys engulfing the primordial primate in us, women made sure, we don't go extinct. No wonder, some human societies were or are matriarchies, and early ones egalitarian. Usually they work well for both men and women. Can't say that about patriarchic societies, can we? Because there is a fundamental difference between hunting and gathering:
Then we came up with civilisation (in Europe, we stole it from the Orient; or caught it, like the flu and the domestic cat), and being primates, our leaders had to be men (standing big on the shoulders of others). Not long ago, we burned knowledged women as witches (and not a few Republicans these days chose to go down the same line, something we miss in Europe). And whenever we waged our manly wars for stupid or calculating reasons, it was usually the women that suffered more.


Men make better soldiers. Warcrimes are naturally a manly domain. Far the most serial killers are men, and all mass-shooters. Women can be as evil as men, but they think about consequences. Women-in-power may wage hostilities, too, but they are not so likely to engage in something utterly useless (it's a fun job, but all accredited LEGO masterbuilders are men) and fight to the last (wo)man. There may have been a female Hitler, but she wouldn't have attacked two foes at the same time (knowing the likely consequence would be defeat), neither would she have tried to kill all jews irrespective of their use to her evil plans (not a few were scientist, and some German nationalists). A female Erdogan or Trump would be unthinkable, but there could be a Putina. In fact, there actually was one: Catharine the Great. Chance is, we wouldn't have celebrated anything yesterday. There surely would have been wars in Europe, but not big, all-destroying and all-engulfing ones.


*****
Half of the human population are women. We can't change barbaric, medivial societies across the world, where women are treated badly. Although we could put more pressure on them, but you can't overlook how happy the baby was with his little swinging sword and the glooming orb.

But in Europe we live in pretty happy and secure democracies.

There is one thing about the happiest countries: they typically come with more women in power (holding the ledgers even in conservative, right-leaning parties).

Maybe it's time, after a century of women voting and millenia of males making all the calls, that men step back. And see, how women will do. But since we live in democracies, and half of the electorate are (more or less primitive cave-)men (see election of Trump, Putin, Orban etc.), there's only one feasible way:


Strip men from the right to vote for the next hundred years.

We had our chance, now it's their time. Matter of fairness. My guess is, the world will be a better place. And not only for women.

PS Just look at Mother (sic!) Nature: Elephants drive off the males when they grow up, because they become too aggressive and dangerous for the group. And our closest relatives, the bonobos (don't click if you're conservative, could contain disturbing news), are unique among primates by lacking alpha-males and establishing close links between (genetically) unrelated females to live a life of unusual, for primates, intra-group peace (ensured by frequent, mutually agreed sex).
By Das Grimm at November 12, 2018
Email ThisBlogThis!Share to TwitterShare to FacebookShare to Pinterest