The Bojo worked, Her Majesty finally will be able to appoint a proper English government with a fine majority. An add-on to Brittania, sail away! from October this year.

End of October, I wrote a little piece on Britain and its unrepresentative democracy, probably unable to escape dooming Brexit. Here, I'll provide an update based on the actual result of the snap election (back in October just about to be announced) that, not surprising at all, wiped away the soft and no-Brexit parties. 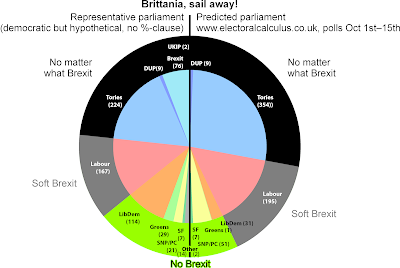 All polling data was unambiguous: Brexit was inevitable. Not because a majority of British supported the Brexit-at-all-cost parties, but because the oldest democracy of the world has never updated its election system: the candidate who gets most of the votes, gets the post (best illustrated in Monty Python's election night special sketch).

Realising the inevitable, the Remain-parties, the Liberal Democrats (LibDem), Greens, the Scottish National Party (SNP), and the Welsh party Plaid Cymru (PC) made a pact to avoid dividing the vote in all constituencies where it may become a tight call. Also, many Remainers considered tactical voting (e.g. Twitter's #tacticalvoting), even if it would mean to vote for a Leave-Labour candidate.

The tactical voting worked out perfectly, for the other side. 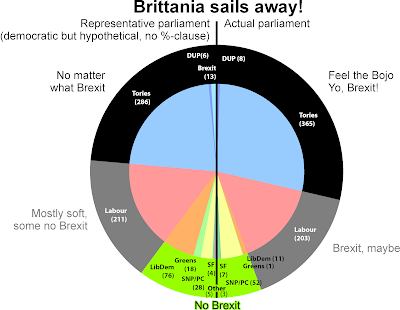 Worried that the unthinkable might happen again (a so-called "hung" parliament, in which neither Tories nor Labour have a majority), the Brexit Party voters went for the Tories. Labour got the worst result since the 1930s, however, not as worse as it could have been thanks to voters of the Libdems and Greens backing (Brexit or not) Labour candidates.

As consequence, a country split half-half (still) between Brexit and no Brexit ends up with a parliament where a large majority (~75%, maybe 80%) of MPs back Brexit.

That this was inevitable, especially after the tactical voting campaign, shows this nice graphic by the BBC (Election Results 2019: Analysis in maps and charts).


Some commentaries already pointed out that Labour's defeat was due to the unpopularity of its party leader, Corbyn (homepage/Wikipedia), and can serve as a lesson for the U.S. democrats to not pit a too left (i.e. centrist, social-democratic) candidate. Naturally, I don't agree. As obvious from the above map, Labour's problem was not being too left (see also the 2-axes assessment of the Political Compass; and the 3D-voter space of the Electoral Calculus) but being not nationalist enough (a lesson they could have picked up when looking towards Denmark rather than towards the other failing social democratic parties on the continent). Because if being too left would have been the main issue, the SNP should not have taken nearly all Scottish seats. They backed Remain without shying back (unlike Labour) because Scotland doesn't want to leave the European Union (see BBC graphic above) and, hence, lose all the support.


Since most of their hopeful candidates competed in pro-Brexit constituencies, Corbyn and Labour could have clearly campaigned for Brexit rather than following a wiggling Yesnomaybe course, while advertising a second referendum once the EU-exit deal is final and on the table. This could have cost them probably some seats in London (lost to Libdems); across the rest of England, where the Tories won this election, the Remainers had (basic situation, tactical voting), however, anyway no choice than to vote for the Labour candidate as any Tory competitor was always much worse. But Labour, much like its brothers and sisters on the continent (e.g. Germany, France, Austria) but also on the other side of the Great Lake (the alleged billionaire baby picked up the election-deciding white-blue collar Democrat heartlands), rather loses a lot to the right than share power with the progressive centre and left of the political spectrum.

As consequence, even in (semi-)representatative parliaments such as Germany (especially obvious in our state elections), the rather open-minded, left and liberal (in a literal sense, not as in neoliberal/libertarian) majority of people are represented by governments running on right-authoritarian agendas to please a pretty small but loud minority in the electorate.

By Das Grimm at December 16, 2019
Email ThisBlogThis!Share to TwitterShare to FacebookShare to Pinterest