Wikipedia has changed the world how we access knowledge. And despite recent (and fair) criticism, it's still an invaluable social project because it provides easy entry portals and an enormous wealth of quick-to-access data. Approaching Christmas, the Feast of Love and Peace, I'd like to point towards a Wikipedia page dealing with something, we tend to quickly forget about: Wikipedia's List of ongoing armed conflicts.

Wars are only news, when they are fresh (my preferred newspaper, the Süddeutsche Zeitung, is a notable exception providing from time to time articles about long-forgotten ongoing wars), or deal with important things like control of resources such as oil. This was the reason I didn't partake in the demonstrations against the Gulf War like all my like-minded co-pupils. We cancelled even Fasching for it, in solidarity with the victims. I didn't want to be part of it because even back then there were other wars, small and big, killing innocent people and nobody would protest or consider cancelling Fasching. The Iraq war on the other hand was nothing we could do anything about: Saddam Hussein, America's former friend #1 as long as he only gassed Iranians, wanted Kuwait and become enemy #1, Bush's falcon administration and their new best buddy, the fundamentalist absolute monarchy Saudi-Arabia, were afraid the oil-supply breaks down. The outcome could be expected: Saddam died, and the actual war started. Because, as always in the last 70 years, Uncle Sam engaged in a war without having any clue or exit strategy.

As long as more than two (male) humans will breath, there will be war. It's a human constant to rather take something from somebody else than try to ameliorate you own situation. Or protect your riches (typically robbed from your own people). Not to mention the two Ferengi prosperity rules (in German a beautiful sounding word: Erwerbsregeln), which are fictional but get it perfectly correct.

Changing between war and peace, and keep peace where global markets are imminent, while keep wars running where they are not, is cloud-cuckoo-land for businesses. Also, we have weapons to sell and buy, not to make profit, of course, just to secure the jobs in the military-industrial complex.


The Wikipedia list classifies wars in death classes:
and comes with a global map:

The tables sum up the following essential information for each ongoing war, military-level conflict.
World-leading ongoing conflict is the widely known Afghanistan conflict which goes back till (at least) 1978 (i.e. 40 years ago!), when the Soviets invaded Afghanistan and Uncle Sam supported (among corrupt warlords) fundamentalist-islamistic insurgent groups, which eventually would give rise to the Taliban. Evil is best fought by evil, right? When certain Americans say (like Trumpelchen, the Sitting Toddler), it's not their war, it is (and has always been). No one forced the US to have a little placeholder conflict with the Evil Soviet Empire (as it was known back then) and its Afghan puppet regime. According to the table and cited resources the conflict claimed 1.24–2 Mio. lives, 35,941 in 2018 which increased to 41,734 in 2019 (so far).

In the class "wars" the leading one is the Somali Civil War, the current phase (the Horn of Africa never was a cradle of peace) started in 1991, with 2,637 deaths in 2019 and a war rarely covered in news these days that involved many failed military campaigns (by the U.S. but also Kenia), a failed state, Somalia (CIA World Factbook) and de-facto independent territories we know little or nothing about such as Somaliland (Wikipedia).

The "minor conflict" with the so far highest death toll is the "insurgence in the Maghreb" starting in 2002 that claimed at least 859 lives this year, and costs the French state ~ 600 Mio. € per year for 4,500 troops keeping relative peace (Opération Bharkhane). Most of these countries were French colonies, saving them from evil people is an obligation no French president shied back from, irrespective of his political orientation. Not to mention still substantial economic ties: 75% of French electricity comes from nuclear power plants, and Mali, France's former colony, sits on big uranium deposits.

Under "skirmishes and clashes" the still ongoing "insurgency in Egypt" claimed about 450 lives in its 6th year compared to 40+ in 2018, hence, is currently on the way to become a "minor conflict".

It's also worth to look at the least deadly armed conflicts in the list: the insurgence in Paraguay (I'm pretty informed and aware of most of the conflicts in the list, but this one was new to me, too) claimed "only" a total of 70+ lives since 2005. Second-last, the death toll related to the Real NRA ("Dissident Irish Republican campaign"): 146 deaths, none in 2018 and 2019.

A barchart of hope

One reason may be that it's not overly easy to include a graphic in the text (I tried and failed myself, for a different article), another that people familiar with professional graphic software don't do freebies. I do, hence, some infographics based on the list's data. In case any Wikipedia editor reads this: feel free to implement when useful, all my artwork on Res.I.P. is shared under a CC-BY licence.


The first plot is an x-y plot, the horizontal x-axis gives the (minimum) number of total victims using a logarithmic scale, the y-axis represents the time. The colours of the bubbles represent the war class over time, the average number of deaths per year. 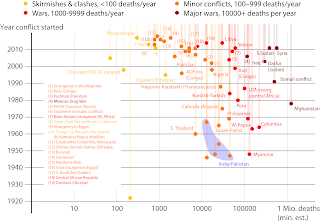 The second plot show the World Happiness Report (WHR) network from last year (when they still published the data, not only the rankings), for a characterisation of the main clusters see European-Not-Really-A-Union #3 – The Happiness Divide. 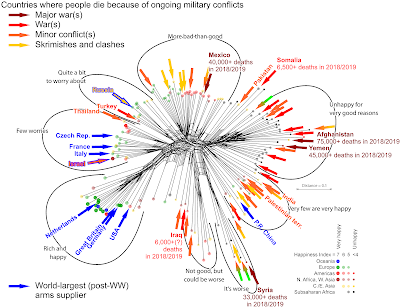 The main topic of the WHR 2018 was migration. By what right do we close the door to refugees of wars fought with weapons we built? Especially towards the end of the year, when many of us celebrate a pagan feast re-dedicated to Jesus' birth, it is important to realise that being killed or afraid your family is getting killed is a strong incentive to go somewhere else.

Something those of us who only know wars by occasional news feeds (like me) tend to forget. As one cannot overlook, when e.g. following the anti-immigrant rhetoric in these pre-Christmas days (including the British snap election) or watching people that did the oath of office on alleged family bibles and have persons like this as "spiritual advisers" (wonder what Jesus, Luther and alike would say facing  televangelism: give me money and you're blessed, I must have missed an important part of the New Testament). Or, in general, the many right-leaning "normal" people (who call people like me "sheeple" and "faithless") and politicians that call themselves Christians in ignorance of the fact that the Lord's son was not only closely related to Syrians and a fugitive but also a beggar who had nothing and shared everything.

I'm too much of a realist to even hope for peace on Earth during my lifetime (or beyond) but I still believe it's the better choice.

By Das Grimm at December 20, 2019
Email ThisBlogThis!Share to TwitterShare to FacebookShare to Pinterest