In Nurses We Trust (and elect the opposite)

I found a new twitter account by the Spectator Index posting funny lists based on polls, studies etc. Such as: how long you have to work to buy a burger. One last week was a Gallup poll asking (U.S.) Americans how they judge the ethics of professionals. A nice piece of unscripted satire.


You should have trust in your nurse


Keeping in mind that such lists are not optimal (e.g. when summarising the World Happiness Report data) and polls are not necessarily representative, the group Americans hold highest in regard are nurses.

This makes sense. The U.S. is the only country among the most-developed ones that lack otherwise common standards such as universal health care (or in the words of the Free: socialistic repression leading to dictatorship). You, hence, do need to trust your nurses. (S)He may be underpaid (some are much better paid than in Europe, though, the upside when only rich people come to a certain hospital), overworked, but it may be the only person coping for you, when the insurance doesn't cover the doctor's bill.


Common reasons for needing a hospital and nurses you can trust are not only uncontrolled guns (as we Europeans usually would think, just 30k casualties per year, < 700 in 2019 so far) or evil immigrants coming via the southern border (as the #MAGA-manious think, no tangible data available). Even cars, only foreign ones of course, kill a bit more than guns. [Question: Does the 2nd Amendment applies for driving an SUV?] But the real enemy of the state are legal, not rarely prescribed, drugs.


Looking at these figures, it's surprising that still 2 of 3 Americans trust their doctors and pharmacists. Both representing (for more than one reason) the real drug lords of the U.S. of A (not pot then heroine, Oxycodone and alike get you hooked for hard stuff). And they all live already on the American side of Trumpelchen's dream-wall (2016)/-fence (2019; never said, Mexico will really pay for it).


But in contrast to the butchering hordes of (southern, but keep an eye on Ogdenvillians) immigrants (why else would you consider a national emergency, look at the numbers, and BiBOTUS announced another caravan is forming, much, much bigger than those before), prescribing opiates and amphetamines is not criminal. Just a teensy-weensy bit unethical to e.g. prescribe Ritalin for each little kid that is a bit over-active and supplies a couple of adults to function (according to a 2011 report about 5 Mio Americans used it for "non-medicinal purposes" [DEA-PDF]; but don't claim you donate them to Romania, or the DEA will get conspicuous).


At the bottom of the list, the usual suspects these days.

Having watched American news, I do understand that only 1 out of 3 trust journalists, because most people working for American TV news (or news channels) are at best infotainers. And it's difficult to find free, unbiased press. However, you find them in unlikely places: I once read a very good article in a local Nebraskan paper about the working conditions of (often illegal) Latin American immigrants cleaning the meat factories at night to make, maybe, also the president's steak great again.

Entertainers entertain, they don't have real ethical issues in their line of work (unless, they start molesting co-workers, but that's not part of the job description, is it?). If the infotainer claiming to be a journalist works for Fox "News", it's a very easy job. Because you don't need to check up on any rumour, or, God be with you, Unfaithful, get the facts. A medley.


Checking facts before disseminating a story used to be a part of journalism, now it's fairly restricted to a subcategory called "investigative journalism" (Wikipedia/GIJN). As foxy-tainer, you just spill out what comes to your mind, ideally (you want to attract viewers to sell ads) the exact opposite of truth. Or reason, put the Common Sense on the IUCN Red List!

When I was a kid, we were told this is lying. Now, it's called ...
And isn't Untruth (I thought, we Germans invented the word, but it exists in English) the twin sister of Truth? So awfully hard to take them apart (in fact it's easy for the English-speaking, if Fox News claims Hüh' and, e.g., the BBC points out, Hott, it's 100% that Hott is the truth; but when Fox News and, e.g., CNN, agree or applaud, there's a chance it's just neoliberal elite bias).

Bankers and lawyers, why would you trust them?


Of course, we all know you can't trust your banker. So, 2 of 3 Americans must have their money buried under a tree or hidden under the floor panels like in the good old days. Banks are only for rich people, for mere physical reasons, which eliminates most of us. Those wearing proudly #MAGA hats believe that only "Crooked Hillary" was a bank lobbyist, hence, the Ryan tax reform, which will help the poor beggars (yes?) and all Big Money donations go of course only to Democrats, never Republicans.

The current "Leader of the Free World" depended (and will depend again) heavily on the goodwill of not too ethical bankers, given his family's main line of business (his "Swedish" daddy laid the foundations with tax-payers money after the War, naturally involving a typical, for the Trump family, law suit [PDF]). Don't point fingers! Who do you hire to sell your house? An honest real estate agent or one who buries a potential buyer in a lot of alternative facts? And when there's a risk, do you use your own money, or would you go to the bank and then file bankruptcy, if the business goes south?

Only logic that Trumpelchen hired one of those unethical bankers as his Secretary of Treasury. Who else could "drain the swamp" if not the Swampthing itself? 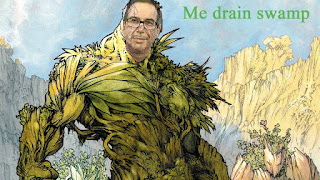 And you wouldn't trust lawyers. Why Trumpelchen, like many of his fellow compatriots, hires and fires (and always had to hire) a lot of them (including the kind who sells you off to the next-best Witchdoctor [latest spin], telling "lies" to save their necks after decades of friendship). Suing is a national sport in the U.S. and the inspiration for some very entertaining TV series (from Judge Judy to Boston Legal, love both). You want to hire an unethical as possible lawyer to get the most out of it, e.g, when you put your dog in the microwave to dry it.

Which, by the way, is an urban myth [ThoughCo/Snopes], we still like to tell on my side of the Big Lake to make fun of you. Just in case, here's the real story, guess who's behind it, and the genuine site of the "True [literally, not as in 'true news'] Stella Awards" (awarded from 2002–2007). In reality, you need them for more natural cases, like when your neighbour's kid drowns in your pool (one of many advertisements). And there's no Interstate in the Land of the Great without billboards for lawyers promising suing the hell out of your car accident.


But the most revealing result of the poll, is the scum who beats them all: members of Congress.

Only 8% of Americans in the poll gave them high or very high ethics. After having elected them into office. And you tell me, democracy doesn't work. In democracies, people do get a government that fits them, don't blame it on others.

The number is not that low when you think about. A rough calculation experiment.

Let's say half of America doesn't vote, not because they are too lazy to, or state laws prevent (or prevented) them from exercising their constitutional rights. [Side-question: Is there a single black person in Florida carrying around a gun and still being eligible to vote?] But because they don't trust the usual choice: a maybe somewhat liberal + neoliberal Democrat (like Hillary) vs. a conservative + neoliberal (or plain fascist) Republican (like Donald). 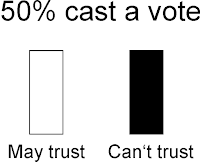 Leaves 50% of American who may trust their MoC.


Let's say, half of the Democratic voters (who make up, these days, 55–65% of the electorate, but are not that well distributed in the heavily gerrymandered congressional districts and empty states) get a Republican representative/senator, which they think is a bigot bull-shitter. No insult intended, just summing up. And half of the Republican voters (the remaining 35–45%) a liberal/communist worshipper of Satan, i.e. a Democrat. Again, no insult intended, just blending into the language on 'true news' portals. [PS Bigot prototype Jones, 'true' newser, Trumpelchen promised to make him proud when he's president, is apparently back on Fac(/k)ebook after being banned for some time. Bless the 1st Amendment, protecting the freedom of shit-chatting the untruth.] 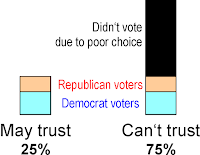 Just because of the system, we are easily down to 1 out of 4 Americans having confidence in their pick. Now, 8% granted their pick high or very high ethics. This leaves c. 1 out of 6 Americans who wilfully elect somebody into office, thinking he (it's usually a he in those cases, see also map above) can't live up to high ethical standards. 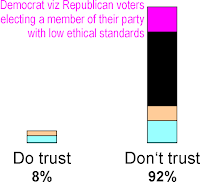 A question one has to ask one self


And not only Americans. If you've realised your politicians live by poor ethical standards, why do we have so many lawyers and bankers in our freely elected parliaments and so very few, if any at all, nurses?

The apparent solution to restore confidence in the American democracy, the shining example we all admire, is straightforward.


In the future, don't go for orange-backs and alike.
Just put (elect) nurses into positions of (political) power.

Given that more women than men are nurses, this also will get a centuries-old injustice right (map above): men pretending working for a better life of all Americans, i.e. including women.


And since the 80s are back full-throttle: Pick a female nurse for president, put her in costume and she will have no troubles getting good deals from the old (or ancient-minded) alpha-men reigning elsewhere (much in contrast to your current orange-back).

PS Don't forget to elect the one or other nice doctor/pharmacist to avoid real anti-drug legislation cutting you of from Mother's Little Helpers.


By Das Grimm at January 23, 2019
Email ThisBlogThis!Share to TwitterShare to FacebookShare to Pinterest