The European Union is drifting farther and farther from being a union. The reasons for the drift are as manifold as they are obscure, so let's focus on what makes us different. For example, how happy we are.

It is rather no surprise that the British start to become less and less happy about leaving the European Union, including not a few Brexiteers and the (mostly) old people and other well-settled Englishmen who wanted to believe the many lies of the Brexit campaign. So, Brittania may sail again on its own and rule the seven seas.


But also outside one of Her Majesty's many realms, people are increasingly unhappy with the EU, and an increasing number of voters are drawn to turn-back-time-parties. A recent clip of Kurzgesagt – In a Nutshell deals with the question why.

As a passionate European, there is a thing I love and fear in our Union. The countries of the EU are a diverse bunch (and some, like Germany and Italy, have never been homogenous to start from). This makes it a much more interesting place to live than across the ocean, where many of us made their new lives after 1592, but it's also the reason why there are no United States of Europe.


So how different are we?

In a post for the Genealogical World of Networks, we explored the data coming with this year's World Happiness Report. It is based on a Gallup poll asking people living in many countries of the world, how happy they feel and what decreases their happiness.


Keeping in mind that this is a perceived result based on a poll, some things are pretty obvious. People living in generally unhappy countries, e.g. sub-Saharan Africa or war-ridden failed states outside Africa, try to get to countries where people are (much) happier. No matter how hard Trumpelchen, the sitting U.S. president and acting Toddler-in-Chief, wishes for it, the Norwegians will not replace the Mexicans (who are quite happy despite their living situation) and other Latin Americans as main immigration group. They seem to very happy with (in) Norway (despite the climate: when you feel a bit down, just check e.g. isitraining.in "Bergen")


The graph above is not based on the happiness score itself (indicated by the bubbles, the happier the country, the larger the bubble), but on different aspects queried in course of the poll that contribute to feeling-happy or not: life ladder, GDP per capita, social support, healthy life expectancy at birth, freedom to make life choices, generosity, perception of corruption, positive and negative affect (to your country of residence), confidence in national government, democratic quality, delivery quality, and GINI indices.

One can distinguish several main clusters (of countries), which come close in most of these aspects to each other (but differ in others, the longer the terminal branch, the more unique they are). 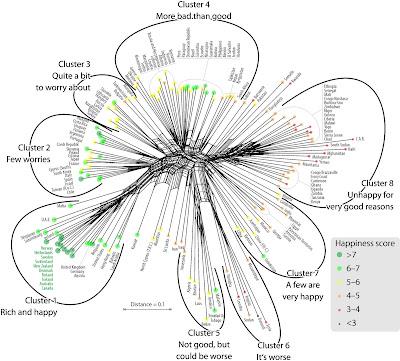 Starting with the least dystopian, least amount of perceived problems, and, hence, happier countries, these are:

EU members states are part of cluster 1 to 4 of this list, while the original EU would only included those now in the first two clusters. And Greece.

Regarding sheer happiness, the EU covers quite a range from

The leaving UK was actually not that unhappy with their everyday situation (6.8) and generally close to Germany and Austria. And we Germans are not going to leave, "our" profits skyrocketed.

Reflecting the happiness score range, we can see that the EU takes quite a space within the overall graph.


One value that goes into the analysis is the perceived level of corruption. This is a critical value, because it reflects the trust people have in their state institutions. 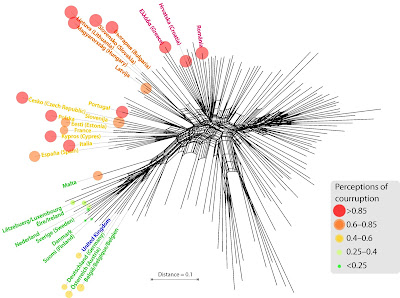 This is obviously a value that takes our EU apart. Keep in mind this is perceived corruption. And our perception differs. In Sweden, ministers have to go when found renting out their pricy downtown flat, something that would in Germany not even be a Kavaliersdelikt (lit. "a gentleman's misdemeanour", a less-than-petty crime). However, we Germans always liked to look down on our partners in the West and South.

And not always without reason. Because the perception reflects reality. States like Greece (e.g. Der Spiegel 2011) and Malta (recent case: the killing of Daphne Caruana, see e.g. The Guardian's Daphne Project) have always been a bastion of corruption within the EU and corruption was more widespread in Italy and Spain than it was in Germany or Benelux. (France is special, with grand école cliques making most calls in both politics and big business, there's less need to bribe; logical consequence was to elect an ENArchist to be saviour of France.) And it has crippled, and increasingly so, the eastern European countries since the revolutions.


But since corruption (at a certain degree) is always good for business (ideally, you sit in a clean country and produce/make deals in corrupt ones), we didn't worry about substantial problems in many of the 2004-s or the openly visible, statehood-eating corruption in e.g. Bulgaria and Romania when invited into the EU.

Germany first (then France, Italy, and the small but industrious original EU members) needed new markets and cheap labour. But this is not without precedence. Greece (1981), Spain and Portugal (1986) entered with their corruption systems intact, just a generation earlier. Systems they implemented when being ruled by dictators. The high-time of the EU was the late 90s (big plans were made, the EU's future was a cloud cuckoo land), when the pretty clean, happy countries like Austria, Finland and Sweden joined.

Happiness and the rising brown mud


Now, let's compare this with the number of votes, right-populist and nationalist-authoritarian parties (see e.g. this bpb map/info) got in the most recent elections. Parties usually promising their I-want-to-believe electorate to "drain the swamp" [Wikipedia/Twitter], just to be the first caught with both arms deep in the pots of gold and entangled in shady finance practices, even when not (yet) in power. As can be seen within the EU the FPÖ in Austria became great with corruption; the rising AfD in Germany channels money from Switzerland, where its anti-multiculti co-leader lived in a multi-culti paradise; Orban uses EU and tax money for ameliorating his home village with stadiums and trains; RN's Marine Le Pen in France was very creative financing her presidential bid, a common sport in France (their party financing rules are very strict and the nigh-opposite of those in the U.S., still, it's not cheap); PiS in Poland, here's the most recent; Lega in Italy (e.g. Russian money, these days; good old fraud before), and the Cinque Stelle are about to follow their lead (see Rome: e.g. WSW; Guardian, see also this article in the same journal, six month earlier and hopeful), and I'm sure, the emerging ultra-right in Spain, Vox, will soon follow) and outside (Trumpelchen's "great", and former, appointees to various offices, e.g. Pruitt).


They promise to make us happier, but they never do. And, so far, most European electorates resist. But their success in happy states demonstrate: being happy can make you mißgünstig, you don't want others to get what you have.

Corruption is found, of course, in other parties as well, especially conservative and neoliberal ones. The German CDU/CSU, motto in era Kohl: "Let's have some dead Swiss Jews to mask illegal party financing", and FDP provide many examples during their post-war history, while Chirac's and Sark(oz)y's UMP in France, now LR, is so full of it that their presidential candidate spoiled his sure success (thanks to the Canard pointing it out) and missed the final round. Finance practices in-and-around Brexit campaign fall easily in the pattern, and the corruption in the Spanish PP, who democratised Spanish fascism, is legendary. Only the Cavaliere, Italy's Berlusconi, then leader of his Forza Italia ("Forward Italy") and a notorious lyer and Sprücheklopfer (lit. "beater of patter"; as usual, Trumpelchen didn't invent the role, he just stole it), casts a larger shadow, spending most of his four times in office trying to escape justice. Don't blame them, they are naturally closer to the pots of gold. When you're (born-)rich, you need stability, and flocks not people. Why all authoritarian governments end up being corrupt and elitist. And why I would never elect a manager, former or future, into a position of political power.
The "centre-left", socialists and social-democrats catch it, too, when in power for too long (PASOK in Greece, former PSI in Italy, PSOE in Spain, Malta's Labour Party). Being rich and really left can make you creative as well (Melouche, the leader and founder of La France Insoumise, is currently looked into). But at least these parties don't campaign on explicit anti-corruption, drain-the-swamp, all-be-good-if-we-just-throw-out-somebody promises.


The thing with education


Every post should have a positive ending. So, let's map the scores of the 2015 PISA report. It may have some issues regarding how well it reflects nationwide levels of education (from France and Germany, I know that geography changes a lot), but it is an easy to access measure. 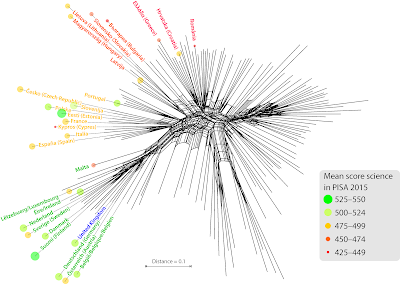 The general trend seems to be: Education makes happy and allows living in more of a paradise with, e.g. low levels of perceived corruption (and other well-feelings). Who would have thought that?

PS The U.S. Secretary of Education, Betsy DeVos, is a creationist billionaire, the first of her kind to hold such an office, with no competence whatsoever (watch the clip). She believes schools should be private and teach what they want (kids are vulnerable to "liberal denial" taught in public schools), make money above anything else, and supported, financially, by the state — the latter is a Swedish model, by the way, and likely the reason why they slumped in the 2015 report. Having hedge fonds running schools paid for by the state turned out to be not such a good idea. Great draining the swamp, may happiness be with you, Land of the Free.

PISA 2015 was also good news for the not-so-happy countries of cluster 2: even if they don't get happier in future (Estonia may, the others probably not), most of them still have access to an education needed for high-qualified jobs in the happiest EU-countries. And thanks to Schengen, we can migrate quite barrier-free.

By Das Grimm at December 05, 2018
Email ThisBlogThis!Share to TwitterShare to FacebookShare to Pinterest